Update 4/26/16: I just watched a German movie “Look Who’s Back” based on the novel of the same name. The English translation is a bestseller. It’s similar in idea to my novel.

This is my upcoming novel with a mock-up cover. 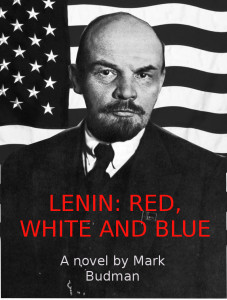 True to the prophecy of the Russian poet Mayakovsky, “Lenin lived/ Lenin lives/ Lenin will live,” Vladimir Ilyich comes back to life in his Red Square Mausoleum. He gets a second chance to fight for the poor, destroy the rich, and gain power for himself.  Unhappy with Putin’s Russia, he comes to America and runs for the office of President, Constitution be damned. On his way toward taking over America, he becomes an overnight sensation thanks to his novelty, his maverick status and his support from poor Russian and rich American aficionados. Women love him, and the rest of the voters are split equally between hysterical adoration and well-grounded hate. Some want Constitutional amendment, and some want him dead again. The Russian Mafia and politicians strive to control him while a love-crazed physician wants a revenge for her scorned advances.

The evening of January 21, 1924, Vladimir Ilyich Lenin, Chairman of the Council of People’s Commissars, was busy dying. He kept sinking into the bog of unconsciousness, filling up his mouth and nose with corrosive muck the color of the Soviet flag. Eventually, he resurfaced, but each time he remained under longer and longer, and each time the burning would get more intense.

The day hadn’t started well. Pain had been knocking at Lenin’s head with a hammer and slashing him from groin to sternum with a scalpel. The world was falling apart like a poorly built shed. When he had returned to Russia from Germany in 1917, Lenin had hidden in a shed like that—leaky, cold and full of blood-sucking insects. He’d lost any interest in bucolic, petty-bourgeois nature after that.

Now, he struggled to resurface back to life, but his body didn’t obey.

Suddenly, he heard a loud ring, as if coming from a phone next to his ear, followed by another and yet another, each one successfully louder than the previous. A sharp smell of ozone cut through the muck. The faces of the comrades, doctors, nurses and guards began to spin faster and faster, forcing him to close his eyes. A gust of hot wind scorched his face and then it was gone.

Lenin opened his eyes. Instead of lying in his sick bed, dressed in his pajamas, he found himself resplendent in suit and tie, sitting in his favorite throne-like chair, in his meeting room in the Kremlin, next to his fifteen commissars.

What was going on? Perhaps he was dreaming? Perhaps the stupid doctors’ treatment caused hallucinations? Perhaps the Western powers were about to invade the Soviet Union and were messing with time and space in the manner of the British novelist H. G. Wells?

Usually, he arrived to meetings in a green 1922 Rolls-Royce. He’d chat on the way with his Polish-born chauffeur—he inherited the man from the late Czar. Then he’d stop for a few words with the Latvian guards at the door—Russian guards were too mercurial to be trusted. Once he’d entered the meeting room, he’d shake hands with his comrades in the order of their importance.

Today, Lenin skipped all this. And his comrades who were next to his bed just a moment ago, got here too. How and why, that was the million-ruble question. Moreover, the pain and burning were gone. He felt fine. Fine but cold.

He shivered. This January was especially harsh. Frost doodles covered the double windows. A red cavalryman pursuing an enemy. The Czar being shot in the basement. A meeting of soldiers, workers, and peasants. Even a few bourgeois, abstract designs crept in. A crimson banner with the words “All power to the Soviets” hung across one wall. In gilded portraits on the opposite wall, Marx and Engels showed off their beards—they didn’t make bushy beards like that any longer.

On Lenin’s left, a bouquet of dying flowers kept flaunting their delicate scent. In front of him lay his mighty pen that could kill people by the thousands, start wars, declare peace and turn déclassé into classy people.

Lenin tried to concentrate on the table talk.

“I’d say, bury him,” Trotsky said. “This is not ancient Egypt.” He wore the cloth headgear of a Red Army officer, modeled after a Scythian helmet, and it looked preposterous with his dusty round glasses, goatee and elongated nose. Yet he was as straight as a leg of a triangle, and got to the point the shortest way, like its hypotenuse.
“I’d say, mummify him,” Stalin said. “And build him a special building. What do you call that? It begins with an “M.” Something about a rodent. Mouse-o-leum? People want to see him. For years to come.”

He actually said “moomify.” This vulgar and rude Georgian robber still had an accent after all these years living in Russia. He had to go.

“I’d say you’re right,” the woman Commissar Kollontai said, turning to Stalin. “Let’s build him a mausoleum. Let’s give the people what they want.”

Very interesting, Lenin thought. Et tu, Brute? An unlikely coalition is forming. Two intellectuals and a roughneck. Will it last? What can I gain from it? And whom are they talking about?